brdfrd2020-11-12T02:09:04+00:00December 8th, 2011|News|
We spent a good deal on Monday, Tuesday and this morning making things out of fiberglass and epoxy, then wrecking them. No just to be spiteful–we are looking at switching to a more modern, less toxic, and from what we can tell, far more appropriate epoxy product.

In September, Greg Loehr of Resin Research signed onto a Grand Canyon trip on which I was rowing my old Briggs dory. The topic inevitably turned boatbuilding and it turned out Greg had been developing leading edge epoxy resins for the surfboard industry for the last three decades. You know, surfers, those dirtbag guys who don’t have a lot of money but abuse their equipment to an unparalleled degree. Kind of like boatmen. Anyhow, Greg volunteered to come up to my shop and put on an informal seminar for several of the local resin-heads, and see what we thought of his product.

Greg’s outfit, Resin Research, makes four different resins, ranging from very hard and brittle to pretty flexible and resilient. For us, flexible and resilient sounds pretty good. Our epoxy of choice for the last three decades, the venerable Gougeon Brothers’ WEST system, dependable as it is, is quite brittle. And we crash our boats into rocks. And they explode.

So here is a table full of lay-ups we made with wood, foam, fiberglass and Greg’s 2040, the most resilient of his resins. 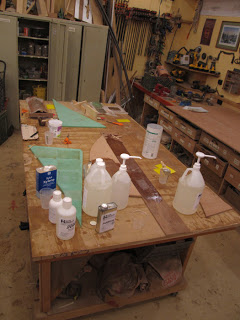 And here is Dan the next morning, testing a fillet joint we made. He is synthesizing a bad wreck in a rapid by hurling a fifty-pound hunk of pig-iron at our sample.

(The video is lost in space at the moment)

We were mightily impressed with how tough the 2040 is. We did some comparable tests with WEST and, well, they shattered pretty badly. Puncture tests were equally impressive. In fact, a layup of toilet paper with 2040 was significantly tougher than WEST with fiberglass. 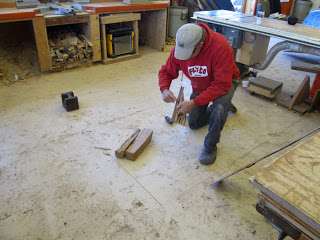 Eventually, of course, Dan and the pig-iron won. But it was nearly always the substrate–wood or foam–that failed, and not the 2040. 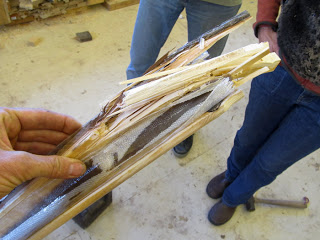 So in my humble opinion as a crazed boatbuilder, I’d advise any and all of my ilk to get hold of some of Resin Research’s 2040, check it out, and consider switching brands next time you run low on resin. Not only is it way tougher, it is far less toxic, and most importantly to the dirtbag boatbuilder, it’s cheaper.

Resin Research
They also have a super-fast hardener called Kwik Kick, for those of us that are ready to do several processes in a row without waiting days for stuff to kick.