Pretty good shape for the shape she’s in

The last week has been full of tell-tale signs of my dread of starting what promises to be an epic adventure: rebuilding the Betty Boop aka Great Thumb, Sore Thumb, Great Thump. I dug into her one day in September, recoiled, and have been avoiding her ever since. So all week I have been doing very important things like sorting my wood pile, vacuuming, messing with sticky drawers, raking leaves, responding to months-old emails, and just about anything else I could do to put off the inevitable. But at 3 p.m. I succumbed. Game on.

I figure we’ll start up front, where the worst of the rot seems to be. That way if I discover something that’s just too godawful, I can start the bonfire sooner. Here she is with the decks in place. 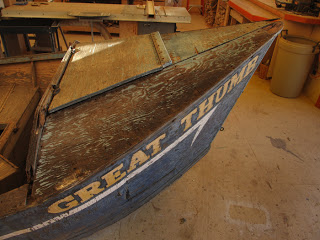 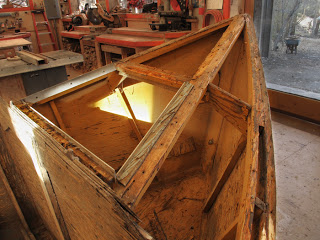 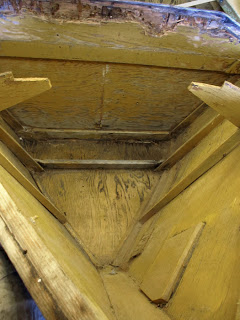 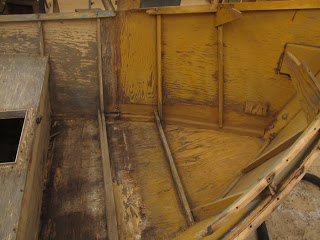 Look! There, on the gunwale: traces of the original Betty Boop red. 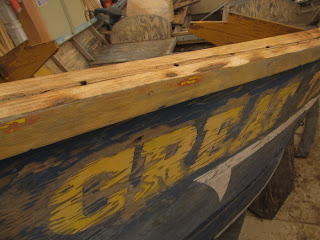 View from the back. 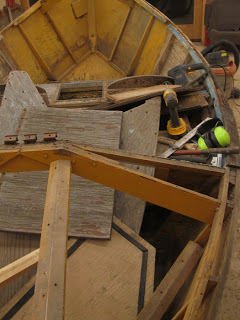 Just a touch of gunwale rot. 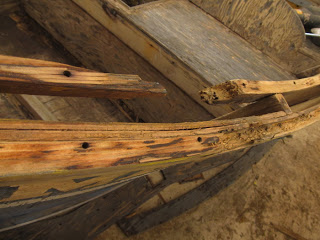 Well… as my old friend the used car salesman says, “She’s in pretty good shape for the shape she’s in.” She’s in bad shape, but the good news is that the rot seems pretty well confined to the floor and one small section of all four gunwales. The sides and all the frames and chines seem just fine. Amazing, and a great relief. The decks are toast, but we knew that already. The plywood simply gave up after two too many decades in the New Mexico rain and sun and snow.

So I guess the plan is to replace the front third of the gunwales, rebuild the decking as I move from front to back, then roll her and put on a new floor. She’ll never look like new, but that’s good: if she did, that would mean I failed to preserve her character and heritage. My current thought is to replicate her decks with only a few exceptions, where the structural integrity is just to goofy.
Tonight’s miracle happened when I fired up the computer. I’d been wondering how to replicate the wacky old sash latches with something close enough but solid. Snappy modern Southco latches would work fine, but it’s a 1967 vintage historical craft. Hmmm. By chance I opened up one of a million emails I’ve been getting from the woodworking companies and boom, front and center: solid brass sash latches of the very same style, on sale, 99¢, marked down from $6.99. I think I bought them all. 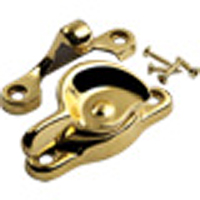 Tomorrow’s adventure: scarf on new gunwale fronts–can I do it without removing them entirely? Stay tuned…