I got off the river on Saturday, laid about in a coma on Sunday, then hit the boatshop hard for the last three days. Zeke punched in for all three, Owen was here for the last two, and Jessica showed up for a long night shift oiling the interior. Kristen, whose boat it is to become, came down from Wild Rivers, Bluff, Utah, for the finale today.

We talked about names for the boat–places, people, birds, etc. Then the name of a long buried rapid on the lower San Juan came up–one old Kenny Ross called Boxcar(s). It was a fast stretch of boulder-choked river below Grand Gulch, where you couldn’t quite see what was coming next but you had to keep making the moves anyhow. The strange, boxy boat in my shop pretty much reached out and took the name instantly. So Boxcar it is.

We about finished her up today, other than a few screws and bolts we need to add in the morning. Then we’ll load her on Kristen’s trailer and send her to the San Juan, where the crew will finish painting her at the end-of-season party this weekend.

Here are a few shots from the last three days:

Zeke working on the seat lids. 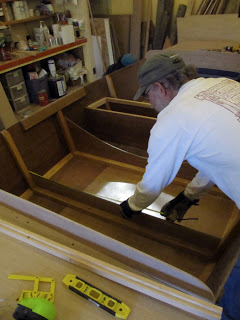 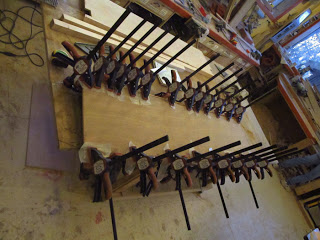 Laying on the White Oak gunwales 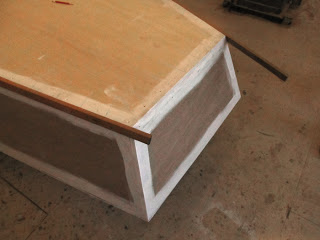 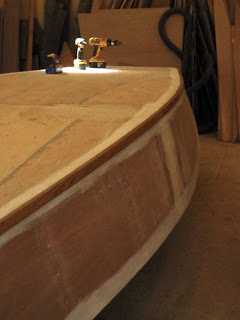 Owen and Zeke affixing the gunwales 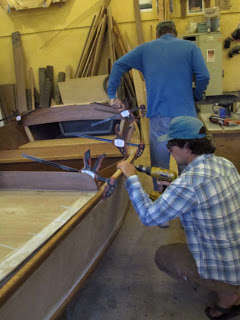 The Boxcar undercoated and ready for final detail work in the morning. We’ll try to get some nice portrait shots when we roll her up in the a.m. 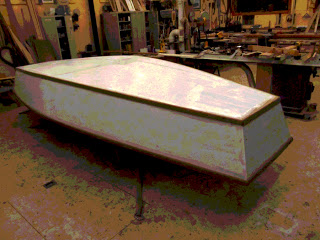