brdfrd2020-11-12T01:11:30+00:00November 20th, 2011|News|
In the 1970s my college/river-running pal Tim Cooper and I bought a dilapidated old five-unit tenement here in Flagstaff. That’s where we learned a lot of bush-league carpentry and mechanical skills, and learned to, with minimal tools and expense, make the best of some really bad situations. Nothing was ever simple–it nearly always turned into a far greater project than we anticipated. Our slogan became, “Once you’ve opened a can of worms, the only way to get them back in is to get a bigger can.”
That’s where things stand with the Betty Boop. I keep finding things that I wish I wasn’t finding. I try to ignore them, but I can’t. So I keep digging. And prying. And yanking. And, oh, did I mention that there is also a special level of hell reserved for the sumbitch who invented silicone seal? And for the people who buy a dozen tubes of it and schmear it all over the inside of every seam in the boat? Arrrrghhh! They do not get it, that water comes in from the outside, hits their wretched silicone barrier, and travels back and forth within the seams, eventually finding a way in anyhow, but in the mean time, rotting the boat to bits. But in spite of the damage it causes, it won’t come off with any known tool.

Okay. Enough venting for the day. Here is what I found when I pulled off the front seat this morning. 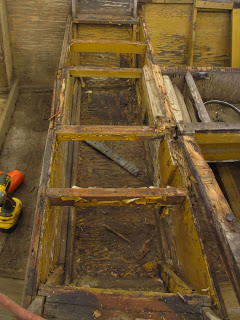 Oooghf. That doesn’t look too good. I hope I don’t catch what this boat has. 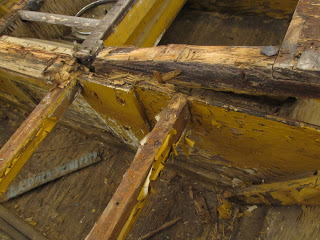 No problem. We’ll just pull that out. 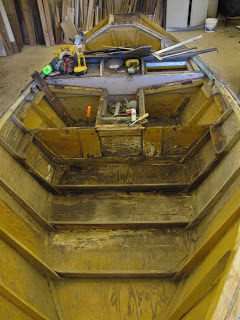 Okay, we’ll take the boatman footwell and the side-hatches out too.

And three floor ribs that are just a little rotten. 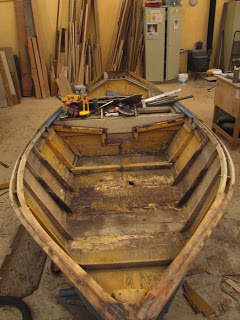 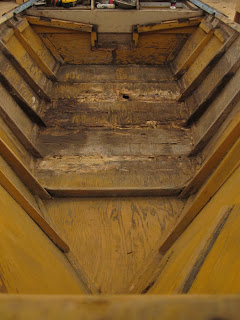 I’m hoping to get the floor ribs replaced before I fall through what’s left of the floor. Then the bulkheads can go in and I can rebuild the front decking. I am thinking that is the order of things, as I don’t want to take much else out lest she begin to lose her integrity and I lose track of her proper shape.

The rear framework is all rot-free, so it should be a lot less traumatic. Might even be able to salvage some of the framework and the final bulkhead. Once she’s all re-decked, the floor can be replaced. And maybe a little bit of the inner chines. Just a little bit….

Yes, I know it would be a lot easier to build a new boat from scratch. And it would come out better too. But hey, it’s the Betty Boop ferchrissake. An historical craft. And an hysterical boatbuilder.