Big day in the boatshop. We started by cutting some bizarrely eccentric chine boards in a wacky jig on the table saw. It actually worked first time, to my amazement and delight. 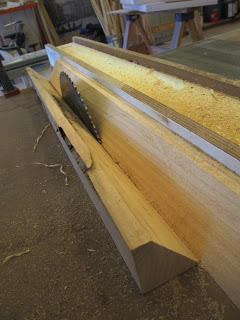 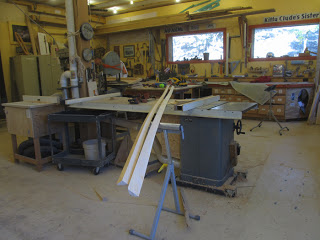 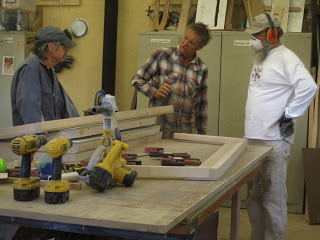 Next RJ and I laid the lumber for the sides (scarfed together on Friday) on the floor and drew out the pattern Andy and I made a few years back. 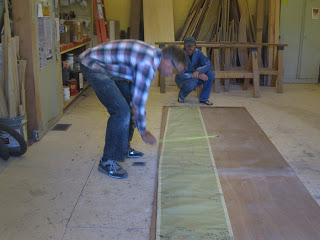 And made a nice clean curve out of the wiggly approximations. 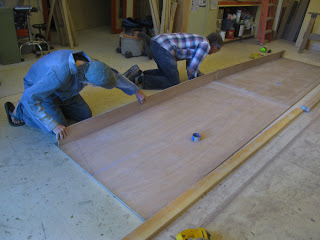 Then we cut the panels out and pre-drilled them so the holes would hit the ribs accurately. 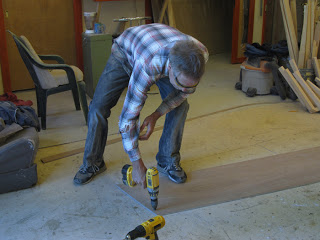 Next we screwed the transoms and five ribs to the side panels so fast I didn’t get a chance to take a picture of the process. John Gray and Cam and Morgan Staveley stopped in to see how it happens. 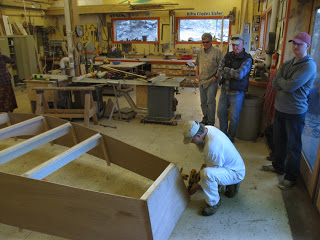 Excited by the rapid progress and not really ready to stop, we dropped in the inner chines, screwed them in place, and sanded the chine line smooth. Then we dragged out the floor panel, marked and cut it, and slammed it on. 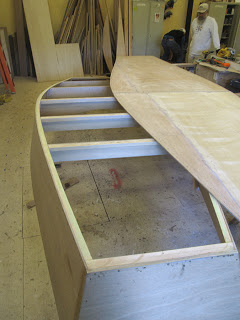 And rolled the boat for inspection and celebration. 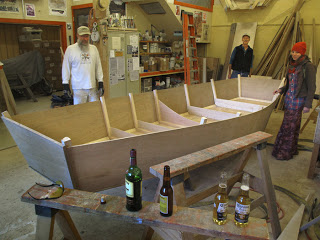 It is a mighty odd boat if you ask me. All the curve of the sides and rocker happen in the center few feet, and the rest of the boat’s lines are pretty straight. (The exact opposite of a Rogue River drift boat, whose ends have all the rocker and whose center is quite straight.) That means the center of the punt will ride pretty low when loaded. But she’ll turn on a dime. The other wacky thing is how flexible she is. Below, Bruce and Zeke, without trying very hard, are twisting a major wrack into the boat. Or maybe that’s the whiskey. We’re guessing the decking, the seats, and outer gunwale cap will stiffen her up a bit, but even then she may twist a bit when life gets stressful. We can’t think of a reason why that is bad, necessarily—but it is peculiar. We tried to put a similar wrack into the McKenzie boat upstairs with no luck. Maybe having the pointy end on the McKenzie makes it stiffer than this strange trapezoidal punt. Hard sayin.’ We ain’t worried though.