One fun part of today was trying to track down some sort of chemical to make the new steel latches look old and weathered. I finally called an outfit in Tucson that made something called EasyRust, which sounded like the ticket. The guy there talked me out of it immediately. Instead, he walked me through how to make the perfect thing myself.

First, soak the latches in diluted muriatic acid until all the coating, scale, etc. is gone. Then rinse them off, and start misting them every time they dry out. After about a dozen times, they’ll get pretty rusty. Once they’ve rusted up good, make a mix of 1/2 tung oil, 1/2 boiled linseed oil. “That’s the original recipe for Rustoleum,” the fellow informed me. Rub that on and bingo, you’ve got 100-year old latches.

Here is the patina factory, on a board over the wood stove: 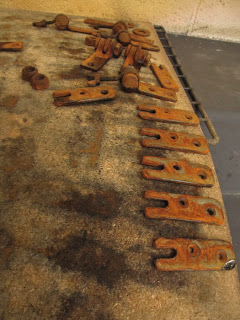 During the hours of mistification, I oiled and assembled the lids–oak rim, cedar planks. Then I trimmed the canvas inside the hatches, folded it back on itself, and tacked it to the rims: 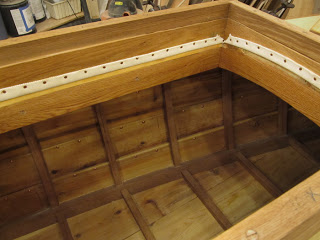 After about twenty or so mistings, the latches did just what the guy said they would, and the tung/linseed mix worked beautifully on them: 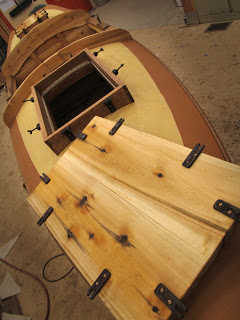 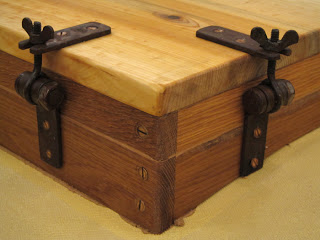 It was only as I was finishing up that I figured out I had left one latch in the vise where I trimmed it yesterday. Poor thing was an hour’s acid bath and twenty mistings behind it’s friends. I guess I can put that one on tomorrow. 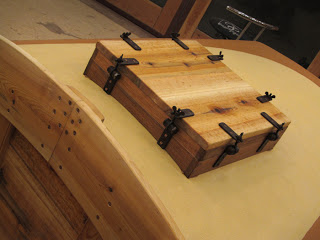