All good things come to an end. Things were cruising along so smoothly. This morning Jess and I riveted on the southern #2 strake, then Jess sanded down the hull just to see how pretty she is, while I prepared last night’s newly scarfed strakes for round three. Might as well take this momentum and run with it, eh?

But upon bending the first one on, we had to stop and retreat to the moaning chair. See if you can pick out the subtle difference between the original boat strake lines and ours: 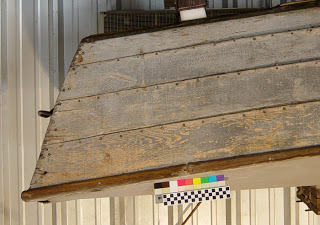 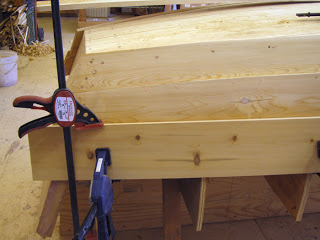 Notice how the third strake has begun to converge with the second? Now check out the bow: 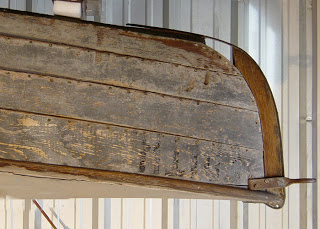 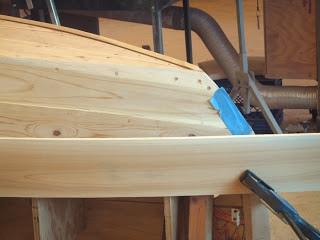 Uhhhhh… That ain’t gonna cut it. Not even if you dim the lights and kinda squint at it.

I went back and measured and fussed for a while, checked the angles of the boat sides, swore, scratched my head, swore some more, and wandered up to the house. Coffee might help. Or maybe a nap? I opted for the latter. After bending my mind a bit in a semi-conscious state, I finally figured out the answer.

Any lapstraker worth his or her salt would have seen this coming. But my mind was still thinking about the Banks Dory we built two years ago and how nicely those sweet arrow-straight strakes bent on, one after another. Dories have flare, and those straight strakes, when bending around the curve of the hull, rise dramatically and create that beautiful prow.

I figured once we got our first strake in place the rest would follow: boom, boom, boom.

But although the first two strakes of the Edith flare outward and rise with the rocker of the boat (or plunge, when the boat is upside down as in the above pictures), the third and fourth strakes are basically vertical, so they neither rise nor fall, but wrap straight around, ending up where you see them in the above pictures. So how the hell did the Racine Boat Company, back in 1911, make those upper vertical strakes wrap so perfectly parallel to the lower flared ones?

One clue I missed is that each original strake is scarfed together out of two pieces. I saw those scarfs and enjoyed copying them, complete with the copper clench nails. But in 1911, they shouldn’t have had any trouble getting nice 17′ clear stock. So why go to the trouble of making a tricky scarf joint?

Because the goddam strakes are not straight! The upper two strakes—although they look straight—are cut into big arcs, so that when they bend around the boat they follow their predecessors. And cutting a 3-inch arc into a 17′ plank that is supposed to end up 7 inches wide requires a huge, wide, long plank. And the ends, where you want the strongest, best grain for fastening the bow and stern on, end up kind of crooked from the arc. But if you use two boards and scarf them together at a slight angle, you can cut the arc out of shorter, far narrower boards and still have fairly straight grain most of the way.

The good news is I just happen to have a whole pile of shorter narrower boards and time on my hands. Now I just have to figure out what the perfect curve really needs to be. Hmmm. Maybe if I’d learned lofting I would already have figured this out.