The final chine half bent into place this morning without a whimper. We then replaced the bowpost and beveled the north forward chine into it. After carefully measuring where that chine-half ended amidship, we removed it and put in the stern half, transferring the measurement of where the bow section ended. We then drew out 16-inch corresponding bevels on the overlapping section of each chine half, cut them, replaced them on the hull and glued the new joint together. 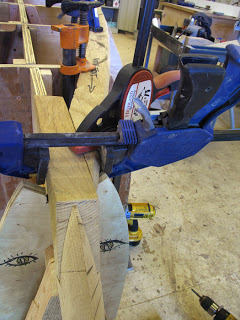 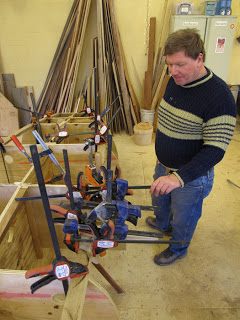 With one chine section cooling in place on the south side of the boat, and the entire length of the north chine clamped in place—and the new joint severely clamped in place, we have somewhat of a clamp swarm. Or a clamp storm. Not sure which. But it’s good we don’t have to clamp anything else right now.

With 3/4 of the chine now in place, the shape of the boat bottom is becoming easier to visualize. It’s a bit bizarre—narrow, long and with a pretty good rocker—a lot like an oversized old fashioned surfboard from the fifties. 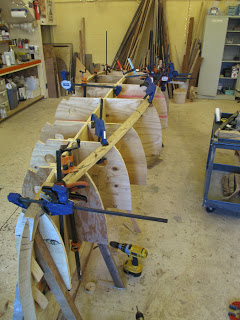 This is going to be one tippy little bugger. I think the lesson all of us have learned that have done trips in the Powell replica boats—which are equally narrow and even longer—will come in handy with Edith. Ballast the bejeezus out of her. The Kolb’s report stowing about seven hundred pounds in each boat. If that load is packed bottom-heavy, with the densest load on the bottom and toward the center, and the fluff up high holding the heavy stuff down and in place, I should stand a chance.

I’ll be running into one of the same conundrums I had in the Powell boats. We try and make a very faithful replica, then try to duplicate the river experience with one major exception: Powell and the Kolbs portaged the big rapids. That’s something we hate to duplicate, so we commit the sacrilege of running them instead.