Its continues to amaze me how fast things happen with a good crew of three boatbuilders. We are a bit behind pace for our more typical McKenzie or Rogue dory build, but this boat is a new, unfamiliar design, unfamiliar construction, and we had to build a strongback. All things considered, we’re screaming along.

This morning, Day Four of the build, we ground down and prepared the gigantic 17′ x 5′ floor for Bert’s Boat, and faired the boat to receive it. 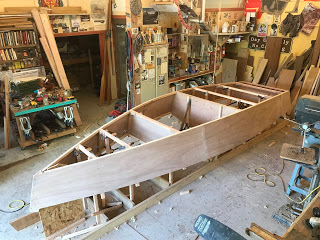 The precision of the screw holes normally necessary for our dory builds is not so important here. For one, the ribs and chines are very wide and hard to miss. Secondly, we are replicating a crudely built boat, created by an 80-year-old feller who built it under a cottonwood tree in Utah with old bent nails and salvaged hardware. Sometimes we just have to say “What would Bert do? He’d probably use cheap deck screws instead of high dollar silicon bronze wood screws. And so we do. Looking at the remains of the original boat, screws, nails and roofing nails are randomly banged into the frame to hold it together. Perfect spacing on our part would be inauthentic. 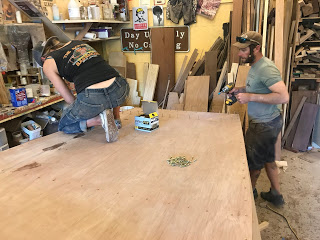 Here I am putting in the last floor screw. It’s an old rusty one from Bert’s original boat that was heading for the river when I rescued it. (So can we call it a restoration now?) And the screwdriver was given to me by Rolf Holmstrom many years ago when I was planning to replicate Buzz’s boat. “You’ll need this,” Rolf said, handing me the old Yankee screwdriver. “It’s the one Buzz used.” 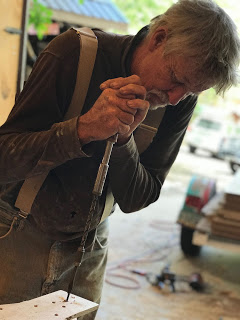 On with the cheesy but authentic plywood chine cap. And a rock bumper. 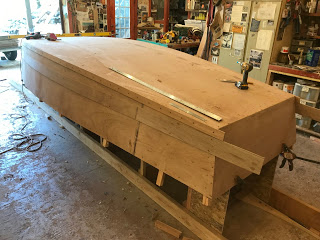 On with the ghastly yellow paint. Bert’s was likely a mix of old paint cans given to him by Greenriver locals. Ours unfortunately had to be purchased at full whack, as none of the mis-tinted paint was close to the appropriate color. This hue is called Fuzzy Duckling. 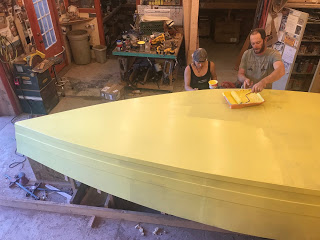 The plywood, however, is top dollar marine ply. But so was Bert’s. He wrote a nice letter to the Harbor Plywood Company, from whom he bought the wood for his 1939 boat. They were so charmed they gave him the wood for the cost of freight. I need to work on my letter writing.. 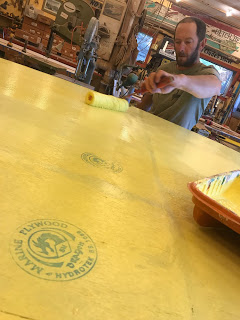 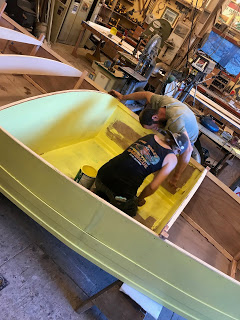 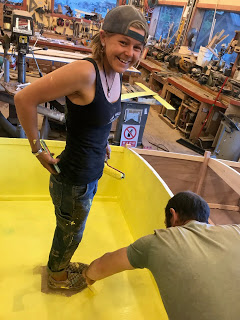 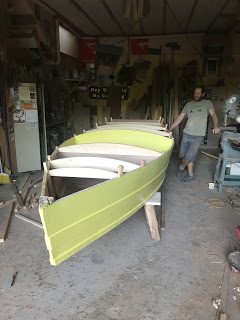 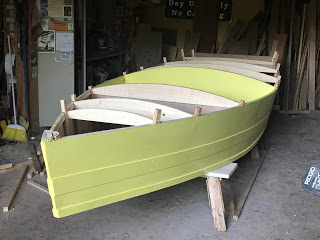 Hoping to get the decks and hatches on tomorrow, as July has few opportunities for the crew to get together again. We’ll see how far we get–we need to shut down early to head for our various destinations–Cricket to Colorado, Pat and I to Maine to build a Viking Faering.