So about a third of a century ago we put the cheapest roof I could conceive of on my house. Kinda had to. No money.

We built the place with cheap rough-cut lumber. And I figured if we used way-cheap galvanized corrugated metal roofing, I could get away without sheathing the roof. So we tacked tarpaper across the roof between the horizontal purlins, and we bought a bunch of that gnarly cellulose insulation they used to sell and blew the whole roof full of noxious gray fluff. Then we tried not to step through the tarpaper (unsuccessfully in many cases) while we screwed on the roof.

At the time there was nothing like a Home Depot, but there was a cheapo joint on the north side of town called Angel’s. Or maybe it was called Ole’s then. Anyhow, they had this thin, low-grade corrugated tin roofing from Japan. This was before China got rolling. The scary thing about buying it was that it was always windy out there and carrying sheet metal roofing in the wind is terrifying.

Screwing the stuff on allowed me another great budget opportunity. Those fancy screws with the rubber gaskets that you are supposed to use were expensive. I figured I could use cheap drywall screws, and put a dab of silicone caulk on the shafts as I screwed them in, and they would make their own gasket as they spun into the steel. It is Arizona after all. What could possibly go wrong?

So for thirty-five years I’ve been cringing, waiting for the roof to collapse when I step in the wrong place. Or for the drywall screws to rust away and release all the roofing to the next breeze, guillotining passersby. Or the accidental holes in the tarpaper to leak condensation into the cellulose and cause a big rotten mess ro collapse into the house. I figured I was going to pay big for my miserly ways.

Today I got brave and went up there and pulled off a few sections to see what was up. 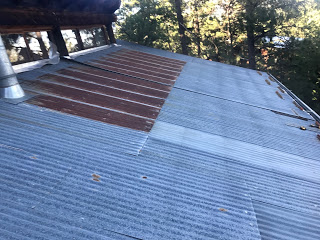 God damn if it wasn’t just fine. The drywall screws aren’t even rusty. The shitty cellulose insulation has settled only a few inches, but it’s still fluffy. The tarpaper has all gone brittle and fractured but who needs it? 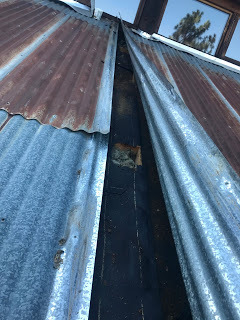 The lame Japanese metal roofing is about to rust through in a few places but not just yet. It’s interesting to see that ten (and only ten) sheets were far lamer than the rest and have gone totally to rust. I think I could maybe get another ten years out of it.

But I won’t. Because I signed a contract to go 100% solar. The deal had to be initiated before July 1 because Arizona Public Service (APS), our creepy electric company, is changing the rules to make it far less affordable. It upsets them to have people make their own power. But now I am grandfathered in.

So the leisurely August I had planned will now become a mad dash to remove all the old galvanized steel (make me an offer!), beef up the insulation, actually sheath the roof (!), and put new fancy metal on it that is guaranteed to live far longer than I will. One thing I need to rethink is my built-in guttering. I used 6″ ABS sewer pipe (black) ripped in half. It did okay for a decade or two, but the UV got to it. Maybe I’ll try PVC this time (white) and give it an anti-UV coating before I flash it in. Thoughts?

Then the solar boys can do their thing and I can start shoving electrons up APS’s behinder. I can hardly wait.