A tantrum and some heavy lifting

brdfrd2020-11-17T15:48:10+00:00January 26th, 2013|News|
Okay, okay, so I threw a tantrum. A swearing, thing-throwing tantrum. Damn it, I fail to understand why plunge routers have springs so powerful in them that they are nearly impossible to adjust with any precision. In trying to adjust the bit to a precise one-half inch beyond the jig, after about five tries including clamps and some rarely used extra-special profanity, the router lunged off the bench, onto the floor, and broke off one of its adjusting handles. This was after a trip to the store to by more bits, as my last one had just broken off mid-scarf. So I threw the jig at the router. The jig broke into about twenty pieces. I didn’t feel any better. And I had to build a new, improved jig. In a last act of vengeance, I took the steel-cutting blade to the router and cut out all the goddam springs. It is a lot easier to adjust now.
After that, the second scarf cut did come out quite nicely, if I do say so myself. Six sheets of quarter-inch ply. I am not going to post the first scarf set, which shows graphically where router began creeping out of adjustment and the tantrum happened.
(The $175 Ridgid micro-adjusting, half-inch-collet router at the Home Depot looks like a pretty good bargain now. No more broken quarter-inch bits, no more rage at my inability to get a clean adjustment. It is in my future. I am worth it.) 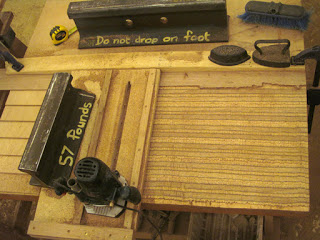 The first of five scarf joints is curing on the table, rain is pouring down, and the Jameson bottle is complaining of abuse. 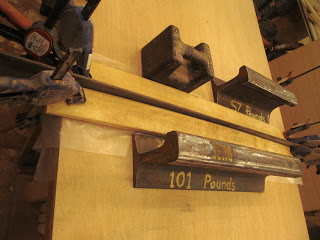 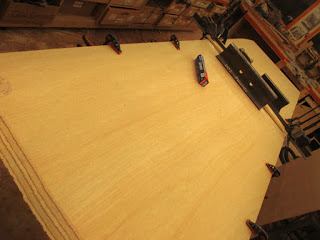