While the cat’s away …

… the mice will play.

Roy and Amy have been hard at work since I’ve been on the river, finishing up the Blacktail. With Jim Hall and others they came up with a really sweet 30% proportional blue stain stripe, with a diminishing pin-strip to set it off. Stunning. They have some wild plans for a fancy transom. A little more interior box work and it’s out the door. Launch planned for next week. 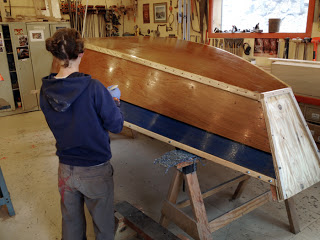 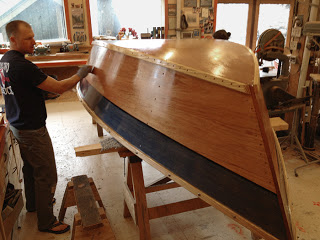 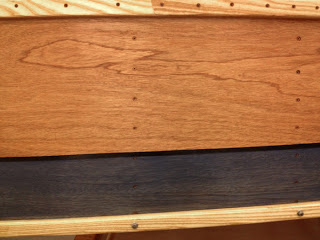 Marieke came by to leather her oars the last couple nights. As we were nearing the end of the project, trying to hold parts steady while we worked, Will came up with a plan for an oar roller made from old skateboard wheels, which soon morphed into a more bush-league reality. A couple of old casters from the cabinet of things-too-useful-to-throw-away… a hinge from the old apartment house Coop and I bought back in the ’70s… some scrap lumber… a few handy clamps… And damn, not enough casters… but beers will work fine: 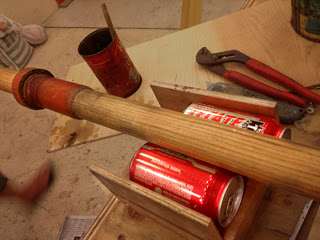 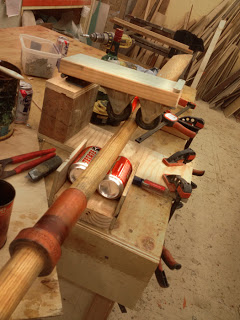 Those oars spin so smooth now!  Here is Marieke applying the smoking hot wax to the leathers. Drink it up, wraps, so you can sweat it out on the river. 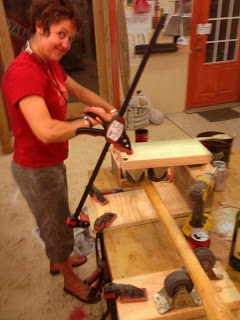 And since we have momentum, let’s resuscitate a couple 40-year old Willie oarlocks to go with the Willie boat we recovered last month. The great thing about those old brass oarlocks is how ductile they are. Pound and pry long enough and they go right back into shape. Some of the new ones are so hard they’ll break an oar before releasing it–might as well use full-ring oarlocks at that point. These ones are old enough they still have the peace sign in the casting. 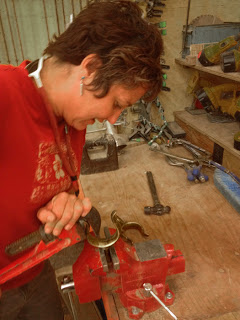