One of my long-term projects at Fretwater Boatworks is to build and run every significant hard-hull rowboat in the Canyon’s history. Which is impossible because several are unknown and undocumented. But it is a worthy goal.

The toughest boat by far to build will be the first: Major John Wesley Powell’s Whitehall harbor boats. They were the fastest boat on the water in their day; a sophisticated curved hull designed to travel at high speed by oar or sail in the choppy water of America’s busy shipping harbors. I hope to have one or more built for the 150th anniversary of Powell’s 1869 journey, so I have seven years to finish my homework and get the boats done. I’ll need it. 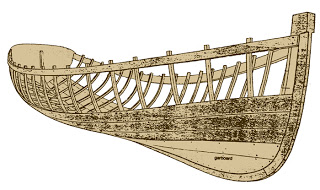 Powell’s boats were built by Thomas Bagley of Chicago. I tracked down Ralph Frese, local canoe legend and boat historian in the windy city. He said, “They were built by a sailor that jumped ship in the port of Chicago, which in the 1880s, was the busiest port in our country. More boats arriving and departing each day than Boston, New York, New Orleans and San Francisco combined. He set up shop at one time under our Randolph Street bridge downtown to build small craft. There is not much more info available.” That’s a start, but I do hope to dig up a bit more on Bagley’s background and training.

There are no photographs or accurate descriptions of the boats of the first expedition. Two were wrecked or abandoned along the way, and the other two drifted into obscurity somewhere on the lower Colorado. But Frederick Dellenbaugh of the second expedition of 1871–2 tells us this:

The boats for this trip were modelled on those used on the former descent, with such changes and improvements as experience had suggested. They were honestly and thoroughly constructed by a builder named Bagley, who had a yard where he turned out a small craft, the the north end of the old Clark Street bridge, and we often felt a sense of gratitude to him for doing his work so well. They were three in number, of well-seaasoned, clear-grained, half-inch oak, smooth-built, double-ribbed fore and aft, square-sterned, and all practically the same…

When I went the first time to look at the boats lying on Bagley’s wharf, their ominous porpoise-like appearance gave me a peculiar sensation. I had experienced rough-water but this was the first understanding I had that the journey was to be more or less amphibian. On a day when the waves on Lake Michigan were running high we took them out for a trial. The crews were filled out by Bagley’s men, our party not all being present, and with some reporters and a cargo of champagne and cigars our course was laid for the open sea. The action of the boats was all that could be desired, and, in the great billows it was so constant that our reportorial friends found some difficulty in obtaining their share of the refreshments. We were satisfied that the boats could ride any sea…

These three boats are well documented in the photographs of the second expedition: 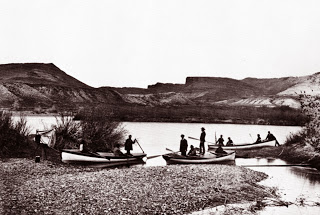 and etchings from 1871-2 pictures were used in the Powell report of his earlier voyage: 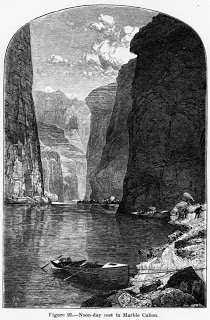 Two of the 1871-2 boats were abandoned at Kanab Creek in the heart of Grand Canyon, and thought to be used by later prospectors before they vanished. But the third one, the Nellie Powell, was left at Lee’s Ferry. In 1938 Leo Weaver, who then ran the ranch at Lee’s Ferry wrote to Grand Canyon National Park Superintendent Minor Tillotson:

Several years ago I noticed a boat down in the willows of one of my fields near the Paria. Dimly, I could see just the word NELLIE in black on the prow. At the time it made no impression on me, in fact I forgot all about it except at such times as I rode through through those willows looking for the cows perhaps.

I had a man clear the brush down there and burn it. Next time I saw the old boat, half of it was burned. Still I thought nothing of it, but now I DO.

I have all that is left of the NELLIE POWELL right in my basement…. some large segments of it….spruce, and some of the nails are square and of copper. Mr. Stone and that bunch who spent a little time with us lately almost had a fit over it. There is no question in MY mind but what it is the NELLIE POWELL all right, but I cannot prove it in the least.

Tillotson sent Chief Naturalist Eddie McKee to Lee’s Ferry to retrieve a large fragment of the Nellie Powell that Weaver offered. Here they are on the very spot Weaver found the boat.: 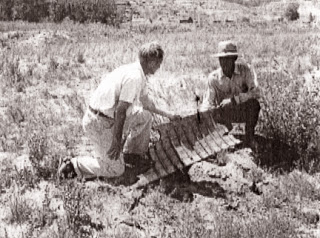 My friend Lora and I spent the day at the South Rim on Tuesday and paid a visit to the Nellie fragment that remains up there–about five feet by twenty inches. The planking appears to be softwood as Weaver suggests–spruce, fir, or pine; the ribs oak; the clench-nails square, round-headed copper. 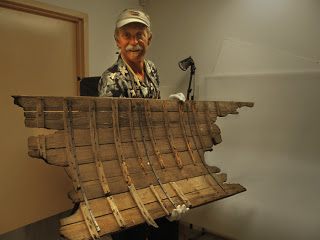 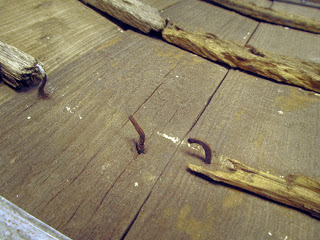 At any rate, I’m on the trail, off to traditional boatbuilding school in May, Chicago for a bit of snooping in June…

Obsession is a delightful thing.