brdfrd2020-11-12T15:47:37+00:00December 12th, 2011|News|
I did a bit more sanding this morning and around noon, painted on Betty’s underwear, an enamel undercoater. That crazy side patch really stands out–but the story of Ronn Hayes driving into a gas station canopy with his brand new boat, and putting huge patches on both sides of the boat, is too hilarious to ignore. It’s part of the boat, as are the patches. 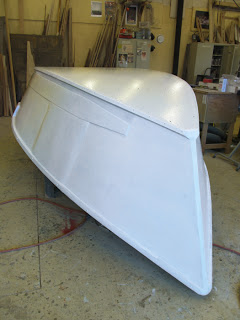 Tomorrow the paint goes on. Although I have excavated some traces of the original paint which, according to Gary Ladd, Hayes called “Canyonesque Pink.” But Ronn’s son recalls the color as being orange, and the Lord Calvert ad shows as being red. The wee chips are a hideous neon pink that I just can’t bring myself to replicate. So I am going with the Lord Calvert ad colors–red, white, and baby blue. 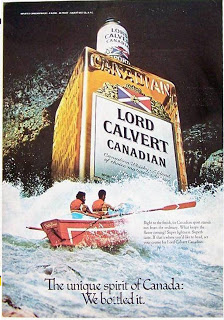