Edith in the Wild

We got off the river last night and drove back into a Flagstaff blizzard. Brr—glad to be in a house and off a frigid sandstorming beach. But the trip was great—five days of flatwater down to Cataract Canyon, and a few days in the rapids.

Wet. Awkward. Slow to turn. But fast, easy to power through the wind, and kind of fun in its own sick, weird, twisted way. The eight-foot oars are both too long and too short at the same time. A bit too long for a 45″ oarlock-to-oarlock canoe—it is impossible to get enough leverage inside the oarlock to take a good, mighty stroke; yet the oar is too short to really get the boat moving in the big water. The other thing is that with its long, narrow profile, she draws water from end to end and is near impossible to pivot in the big water. Oh—and the stern, which is the downstream end of the boat, is low enough so that even modest waves crash over it, crash over the splashboard, and land squarely in my face and the oversize cockpit, which quickly swamps. These are problems.

But I’ve rowed worse. The Powell boat is even tougher in big water, being another five or more feet long and no wider. What I came to realize is that the Galloway style boat is far closer to an Powell boat than I had imagined, far more distant from the Nevills boat that superceded it. Truly a transitional hull, but it is small wonder that the Nevills boat eclipsed it so suddenly and definitively in 1938. I had expected Edith to row somewhat like the Holmstrom boat I built ten years ago, since that was a modified Galloway, being the same lines, but shortened a foot and a half and widened nearly a foot. Not even close. Holmstrom was far further ahead of his time than I had guessed.

But I think with a bit of forethought and a bit of luck, Edith and I will make it through Grand Canyon this month.

Somehow with all the wind and chill, I forgot to take many pictures. I hope to share a few more that others took, along with a clip or two of video. But here are a few shots from Tower Park on the Green River. 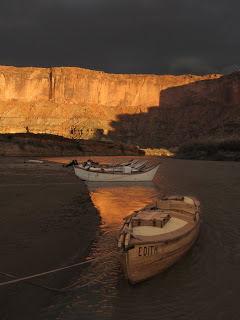 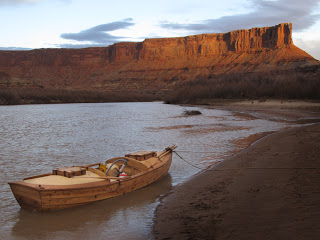