A slow day. Trimmed off all the edges of the decking, fair to the hull, and sanded them down smooth. Built a second oarlock block and sat in the seat with the oars. Came to the realization that even though eight-foot oars are pretty short, they are pretty long when your oarlocks are only 45 inches apart. This may prove annoying on the water. Looking at the photos of the Kolbs, it looks like they had the same issue. According to the tried and true oar to beam ratio, the oars should be closer to six feet. Egad. 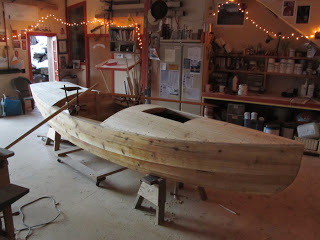 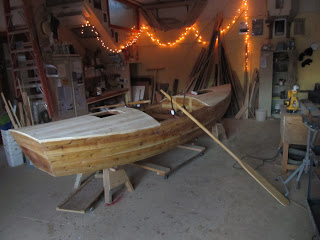 Oiled down the decks and floorboards and am ready to drop the latter in tomorrow. Then it’s time to figure out just how to deal with the canvas decks. Wet it first? Not? Hmmm.