This morning I did a bit of touch-up caulking and made the decision to burn the name into the boat. Using  a blow-up print-out of the original name, I traced it onto the boat with carbon paper. (Remember carbon paper? You’re old!) Then using a combination of a dollar-store soldering iron and a propane-torch copper soldering tip, I branded her, in the original Kolb unkerned font. I took special delight in the period after the name. EDITH. Period.

Here is the original being traced onto the hull. It was remarkable to notice as I did this that the texture, color, and grain of the original boat in the photos, where the gray paint had peeled away, almost perfectly matched the replica: 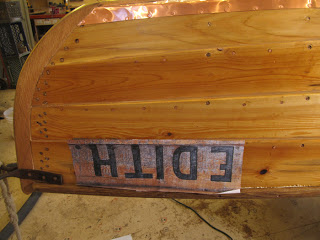 And here is the burnt boat (it only caught fire a couple times): 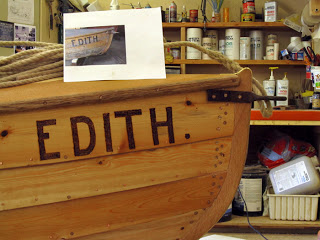 In writing historical work there is an annoying tradition that whenever you copy an original misspelling, you put the word [sic] in brackets, to indicate that you, of course, know better than to make such a mistake, but you have to in order to be faithful to the somewhat more ignorant original author. I feel like a lot of this boat needs a [sic]. So much of the construction is inappropriate for what we now know today to be the parameters of a whitewater boat. But back then they were building for one trip, not a career of river boating and decades of cherishing the same old boat. They were just damned happy if it lasted to the end of the first voyage. So all these goofy things, like ribs that do not connect to the chine, copper exterior chine strips that protect little but will trap silt and rot, hatches that really won’t keep the water out, a cockpit that will practically sink the boat when swamped–that’s all part of the game, part of the grand experiment to see what those guys were really up to.

I weighed her this afternoon. The Kolbs claimed they were about five hundred pounds apiece. My Edith is 406. But the Kolbs, to be fair, had three galvanized boxes built into the boat–two that were airtight buoyancy chambers in the very ends, and one hatch liner. All in all, it’s pretty close. I’ll make up for that extra 94 pounds with important things. Use your imagination.